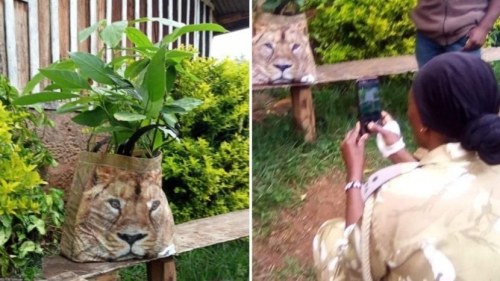 Residents of a village in Kenya were left terrified after spotting what looked like a stray lion hiding in the bushes. Wildlife officers were called who rushed to the spot and cautiously approached the ‘animal’. However, it turned out that it was a mere shopping bag with a realistic picture of a lion. The amusing incident took place in Mutiribu village in Meru County which is just a kilometer away from the Mt Kenya National Park. A farm worker had raised the alarm after noticing the ‘lion’ outside his employer’s home, as reported by local medias.

As the news spread, the residents were sent into a tizzy with everyone fearing the wild cat. Soon, they alerted the Kenya Wildlife Services seeking help. According to local chief Cyrus Mbijiwe, no recent sightings of stray lions were reported in the area. But despite this, the residents claimed that some of their livestock went missing.

As the officers arrived at the spot, they swung into action and tried to lure the lion out of its hideout. But, with their efforts yielding no response from the wild animal, they decided to look closer just to learn that it was just a bag with a lion’s head printed on it.

“We treated the incident with a lot of caution and seriousness,” said the chief. He added that the officers first ensured the residents’ safety and then discovered during investigation that it was a bag.

Reportedly, the bag was placed by the homestead owner. She had kept some avocado tree seedlings in it to prevent them from drying out. This gave the bag a 3-D look thus leading to a frenzy in the village.

It was learned that the owner had gone out when the officers came. When she arrived, they advised her to enter her home from the back door due to the lion. Hence, the lady could not join the dots that the bag was being mistaken for a lion.