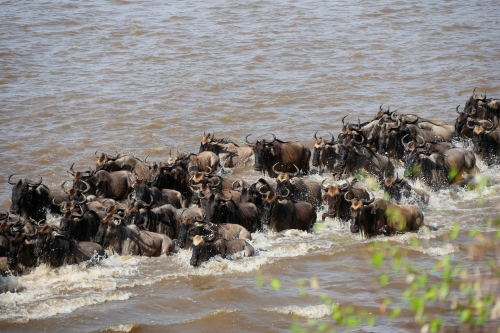 It is one of the most spectacular and breathtaking events in the world. A dream for many to witness this incredible natural wonder.

The Great Migration is one of the most amazing events one should never miss out, nothing is thrilling like watching the these animals in big numbers running up and down in the grasslands and crossing rivers, it gives an unforgettable experience in the wild.

The Serengeti wildebeest migration is Africa’s great migration and happens every year where by large numbers of wildebeests (over 2 million) and other animals like the grant’s gazelles, impalas, zebras(over 200,000), elands, and Thomson’s gazelles migrate from the Serengeti plains in Tanzania to the Masai Mara in Kenya.

They move clockwise over 1,800 miles annually which makes their migration easy to predict. They mainly migrate in search for better water quality and new grazing grasslands.

Depending on the rainfall in the previous year in the Maasai Mara, the mega-herds will make their trek down into Tanzania and further south during December. By January, expect the migrating herds in the Southern Serengeti Plains or Southern Loliondo in Tanzania, grazing on the green, lush grass recently revitalized by good rainfall.

The long rains are falling in Tanzania and the herds begin to migrate to grassier plains and woodlands of the Serengeti Western Corridor. The rain can, at times, make it quite tricky to follow the herds during this stage of the migration as roads become sodden and difficult to navigate. A number of camps close for annual maintenance during this period. That being said, if you are on safari it is an incredible time to visit, and although it is wet, there are few tourists and you may experience the migration and have the Serengeti almost exclusively to yourself.

The end of May marks the end of long rains in the Eastern Serengeti and Northern Ngorongoro, and as the rain ceases, the herds gradually move north.

See the arrival of the Wildebeest to the Serengeti’s Western Corridor and onwards to the Grumeti Reserve. During this period, the herds reach their first high-risk hurdle, the Grumeti River. This is the first of the breath-taking river crossings you will see.

Both sides of the Mara River are important during this period. The herds begin to cross central Serengeti into the Western Corridor, then through the Ngurumet River into northern plains of the Serengeti. Come late July/early August, the grasses of the western Serengeti die and the herds move on north seeking further grazing.

However, before they are able to reach the succulent grassy plains of Kenya’s Maasai Mara, they are faced with the next dangerous river crossing, the Mara River.

At this stage the herds move through the northern Serengeti and the Maasai Mara plains should be scattered with large herds, naturally followed by their hungry stalkers. From October onwards, the herds will slowly begin their journey south, back to the Serengeti in search of better grazing.

Planning a safari to witness the Great Migration can sometimes be tricky, as you have to be at the right place in the right time. To get the most out of your trip we have listed a migration guide month by month, including a Serengeti map with the predicted route for the best migration experience.

Kilidove offers you the best safari experience. Embark with us on the journey of a lifetime.

Follow this link KILIDOVE SAFARIS to get to know our tours or write an email to kili@kilidovetours.com